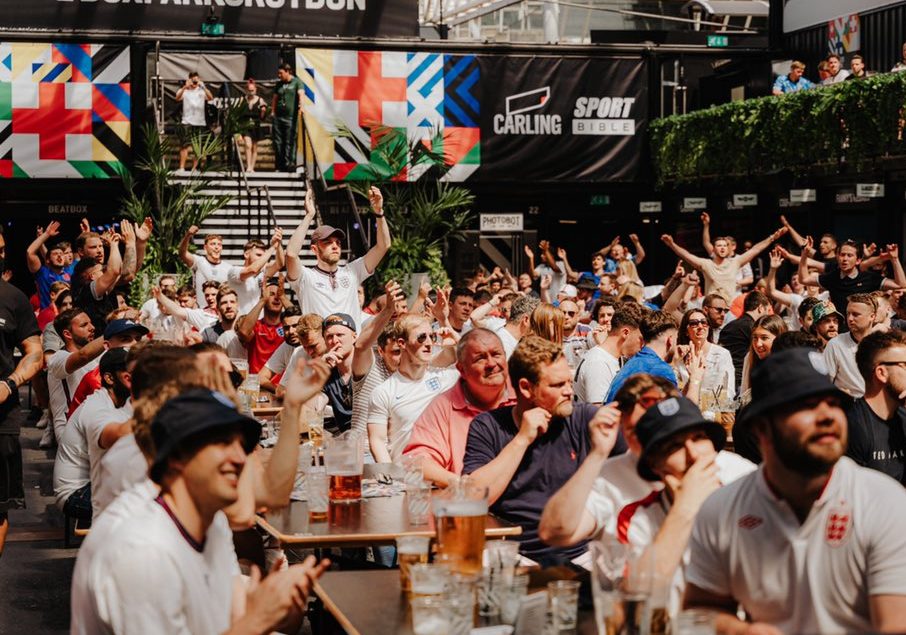 After a year of delays and isolation, SPORTbible and BOXPARK are teaming up to help everyone feel a part of the Euro’s fan experience.

Scenes at BOXPARK went viral during the World Cup 2018 as England fans celebrated their team’s journey to the semi-finals, and BOXPARK became known as London’s spiritual home for live football screenings, offering the most authentic atmosphere with the ultimate fan experience. This year, as BOXPARK’s Official Euro 2020 media partner, SPORTbible will be amongst the fans to bring the Euro 2020 fan experience to their global audience of nearly 18 million.

As well as  digital billboards and branding throughout the venues, the partnership gives SPORTbible exclusive access to fans at BOXPARK’s Wembley, Croydon and Shoreditch sites.

As part of SPORTbible’s Euro 2020 coverage, teams on the ground will be reporting on fan reactions, testing fans on their Euro knowledge and capturing the extravagant celebrations of England fans to share across SPORTbible’s TikTok, Facebook, Instagram and Twitter channels.

SPORTbible will also be making the experience immersive as they launch a special edition GEO / Location based AR hologram with audience favourite, YouTube star and previous Mayor of London candidate Niko Omilana who gives a pep talk to fans to encourage them to get behind the England team.

The AR hologram stands two storeys tall on top of BOXPARK Shoreditch, and  is accessed through a QR code distributed on and around the BOXPARKShoreditch site. An on-demand version of the hologram will also be available through SPORTbible’s channels so millions of fans can join in wherever they are. The hologram has been created by SPORTbible’s in-house Immersive and Originals teams, with web development by Aircards.

Joe Williams, Head of Immersive, LADbible Group said, “SPORTbible is the home of the fan, and we’re passionate about giving our audiences the ultimate Euro 2020 experience after a year of delays. Our partnership with BOXPARK places our editorial team at the heart of the greatest fan parks in the country. LADbible Group’s first location based AR format with audience favourite, Niko, sees us merge the physical and digital worlds together in the ultimate immersive fan experience.”

Dan Fullarton, Head of New Business & Partnerships, BOXPARK said: “BOXPARK effortlessly became the capital’s renowned venue for live football during the World Cup 2018 and as an award-winning hospitality operator, we have developed a strong synergy with the sport which plays an integral part of our overarching events programme. The much-anticipated tournament is our biggest event of 2021 so far and the first weekend has already significantly driven sales across the estate. Both our partnership with SPORTbible and our fantastic roster of talent and live entertainment through the Euro’s will enable us to create a unique matchday experience for fans.”

BOXPARK and SPORTbible’s partnership kicked off last weekend with England vs Croatia, where SPORTbible descended on Wembley to score in-the-moment content with the crowds. Videos were created for SPORTbible’s Instagram, Twitter and TikTok, with fans quizzed on a Euro’s focused ‘Wrong Answers Only’, Sean Williamson aka Barry from Eastenders serenading England fans in their win, and fans reactions captured as they celebrated the team victory on Wembley Way. The content was watched by over a million people across the weekend.